This advert appeared in the 16th April 1968 issue of Tintin magazine (Belgian edition). Parein are a Belgian biscuit company, & the inventors of Tuc biscuits & many others. The ad uses the standard trick of claiming that since there are four transfers on each sheet, there are thirty-two transfers to collect; but there are only eight sheets — besides which if you count them carefully, there are actually thirty-three transfers.

The date of the advert pinpoints this promotion precisely, & it means that these are the earliest full-colour dry rub-down transfers ever seen. The Batman Shredded Wheat transfers were the first colour transfers, but since they were silkscreen printed, they were not FULL colour; these ones are gravure printed, & (if there were none earlier) then they were first off the press at Letraset's brand-new factory.

This factory, at Ashford in Kent, was built around a new Rotary Gravure press, which enabled full process colour for the first time & allowed artwork to be mechanically separated rather than made to have colour laboriously simulated on separate sheets of spot colour.

"First, if there were none earlier" may look tautological, but this is not a straightforward issue. We certainly haven't found any earlier, & in fact when we came upon this advert it really threw the cat among the pigeons, since it was quite a bit sooner than we had thought possible.

The confounding evidence lies in two statements by John Chudley, then the Managing Director of Letraset:

"The work on the new factory proceeded well, and by the autumn of 1968 we had installed most of our production with very little disruption…

"We received from Italy the largest order for our toys (to be used as premiums with a specially prepared cheese for children) that we had ever taken and it proved to be so successful that it was reordered several times before it was eventually dropped. …Our large premium order had both required and virtually paid for the gravure printing press we needed…"

Letraset: a Lesson in Growth
By John A Chudley
Published by Business Books Limited, London. 1974.

You can see why this originally made us think that the first gravure transfers would have been printed in the Autumn at the earliest. However, product was appearing at least as early as April — QED.

Okay, that's clearer now, but what's all this stuff about premiums in children's cheese, ordered from Italy?

We've looked into this, but it seems undecidable. There is a brand of cheese products called Milkana, which is now owned by the German company Edelweiss. I asked them if Milkana used to be Italian before being taken over, since I found lots of ads for Milkana from all over Europe, including Italy, in 1968. They said "does not compute". Milkana did do an Asterix promotion in cheese triangles in 1968 (although Edelweiss won't admit to it), so perhaps we may still discover something…

The cheese triangle angle also led me to believe that Bel, who own "La Vache Qui Rit", may have been the mystery company. Not Italian, but close; & it was while researching this possibility that I discovered two "La Vache Qui Rit" promotions featuring Letraset transfers: "A La Conquête de l'Espace" & "Goldorak" (page coming soon).

However, on investigation, these two promotions proved to be too late to qualify for the 'First Gravure Transfer' medal.

Our current best guess is that when writing his book, Chudley confused Parein's chocolate wafers with Bel's cheese triangles, & confused Belgium with Italy. We may be doing him a disservice, but that's how it seems for the moment.

There is another advantage to this interpretation; Chudley mentions reordering the promotion. If you take this to mean not just a simple reprinting, but a whole new promotion based on the same artwork, then this fits these transfers like a glove. They were produced at least twice, but for different clients of the same single agency, as you can see from the section on "Sunlight Soap", below…

The above backgrounds & transfer sheets, & the cover immediately below, appear courtesy of André, a Tintin fan from Belgium. He has been extremely helpful, & we are very grateful to him for allowing us to see the whole range.

Here's a complete kit for set number 4, "On a marché sur la Lune", courtesy of member of SPLAT Joe Robinson: 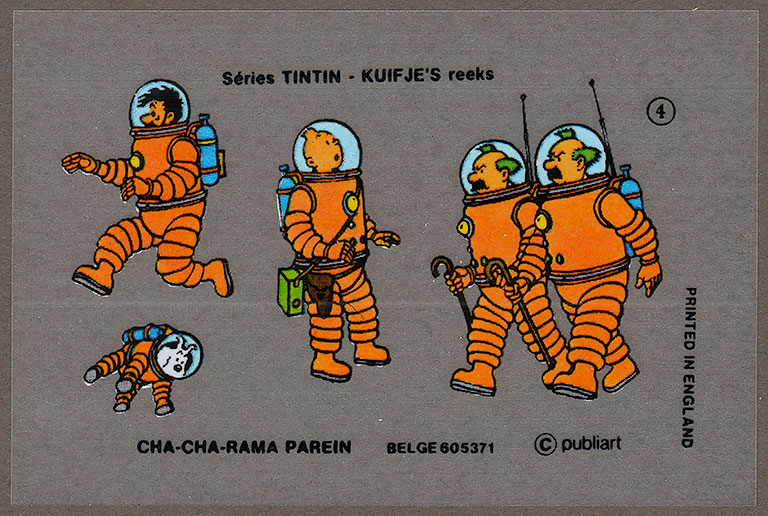 Finally, this photo shows how the backgrounds folded at the edges to fit into a box of Parein Cha-Cha biscuits:

You can see from this photo of a Sunlight Soap transfer in its envelope (above left), that compared to the equivalent Cha-Cha-Rama transfer (above right) the two are exactly identical in every respect apart from the text which appears on each. The same applies to all eight sheets. This means, of course, that Letraset will have had to produce new gravure rolls — a very expensive thing to do, & best avoided if not entirely necessary.

The Cha-Cha-Rama transfers are copyright Publiart, the advertising agency formed as part of the Lombard publishing house in order to deal with the marketing of their characters (& others). However, the later Sunlight Soap transfers are simply marked "Editions Lombard".

I'm not sure what the text "Belge 605371", which appears on all the sheets of both series, refers to, though. It seems too long for a postcode (Belgian postcodes are four digits), & too short for a phone number, which would require a regional prefix. André suggests it could be the "Numéro de Registre de Commerce".

The above three photos courtesy of ruedulabrador.com

We haven't seen any ads featuring this promotion yet, which seems to be much less well-known than the Cha-Cha-Rama one.

There is always the possibility that another promotion using this artwork may turn up, if we have interpreted John Chudley correctly!

If you're reading through the article on "Free Gift Transfers with Confectionery", then…


If you're reading through the article on "Free Gift Transfers with Other Products", then…


For more Tintin in the form of Letraset, see also…

And here are some other related links: