…And other interesting things… 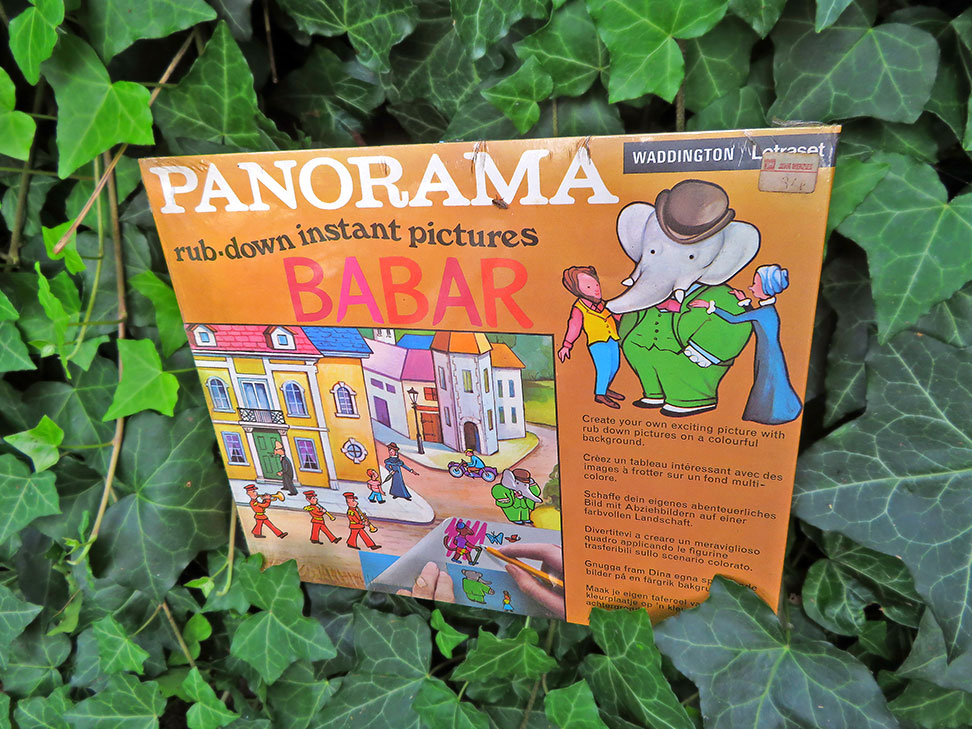 (N.B.: there is NO PRIZE for spotting the leaf-hopper in this photo.)

Imagine you bought a book by a certain author, with a certain title, concerning a certain plot involving certain characters, & on your recommendation your friend bought the same book; but when you discussed it with them later, it became apparent that while all the significant events were the same, the words were completely different in each of the two books. Weird, right? Why would an author go to all the trouble of writing two versions of the same book? And why would a publisher print both, without even mentioning this crucial fact?

And yet that's exactly what happened with the Babar Panorama; each set contained the same background, but there were two different pairs of transfer sheets, distributed apparently at random, with nothing to indicate which choice you'd be making, or even that there was a choice to make in the first place.

It's the story of four companies in three different countries, & how they all tried to solve the same problem: selling large-scale transfer sets.

Three years later, US toy company Hasbro saw how well Panoramas were selling (not least in the US), & decided to copy the format, calling their new sets Picturamas & using their own inferior transfer technology:

The next year, Comano in France saw the Hasbro sets & licensed three of them for their Mako brand, calling their sets Mako Calcoramas. They also sold the transfer sheets separately, without backgrounds, & those they called Mako Calcos (the name being derived from "decalcomanies", of course). 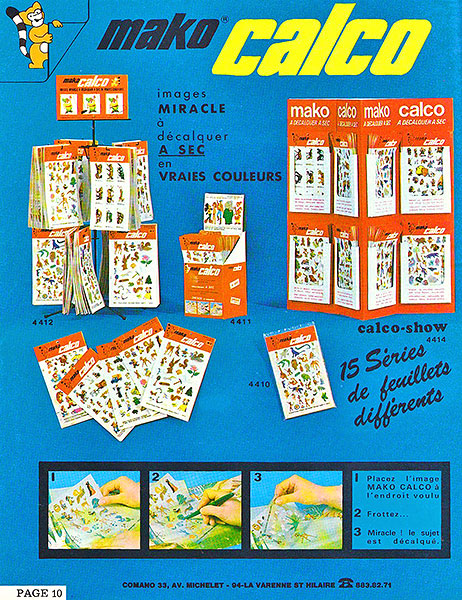 The fourth company is Waddington's, who as a commissioning client distributed Letraset's Panoramas.

Now it gets complicated…

Of the eight Character Panoramas Waddington's distributed, these first three (dealt with earlier) were released before Hasbro came up with their Picturama format. Doctor Dolittle & Captain Scarlet were done & dusted before any of this, so they don't affect the story; the same for the Jungle Book Panorama, except that confusingly Hasbro also licensed The Jungle Book for one of their Picturamas. However, the two Jungle Book products were entirely separate, & executed very differently.

Waddington's released their Jungle Book Panorama in 1968 following the March UK film premiere, well before Comano produced any transfers at all; this is, of course, why Waddington's didn't bring out a Panorama using the Mako Calco sheets. When they did appear, the Mako Calco Jungle Book transfers naturally used the Hasbro images. The Jungle Book film didn't appear in French cinemas until December 1968, so a publication date of 1969 wasn't late — it was timely.

Waddington's did in fact reissue their own Jungle Book Panorama, in 1971, but they naturally used their own previous transfers (& the GK232/3 reprint transfers came much later, in 1976, as explained in the Jungle Book article).

(Letraset did eventually release more Character Panoramas after these, but that was many years later, once Waddington's were no longer involved.)

Six series of Mako Calcos (& Calcoramas) appeared before 1972 (at which point the Comano catalogue listed subsequent titles as "new for '72"):

The first three, from 1969, are clearly tied-in with Hasbro. There was a Hasbro Jungle Book Picturama 2906, & the Cowboys & Indians Picturama is 2904. I thought there must have been a Snow White Picturama, probably either 2903 or 2905, but just possibly not, since 2940 is the stock number for Hasbro's Snow White Stand-Up Rub-Ons.

At this stage, Waddington's were not involved; this is strictly between Comano, Hasbro & Letraset.

So Comano encountered Hasbro's Picturamas, & licensed a few of them. But Hasbro used their own shoddy transfer technology, & faced with the unavailability or undesirability of that, perhaps Comano hunted around for a European source for transfers & contacted Letraset. Possibly Hasbro wouldn't allow printing of their transfers outside the US, & that might have meant import restrictions.

For comparison purposes (& not to scale), here are the Hasbro 'Cowboys and Indians' transfer sheets, with below them the Mako Calco (Secalco) 'Wild West' equivalents printed by Letraset: 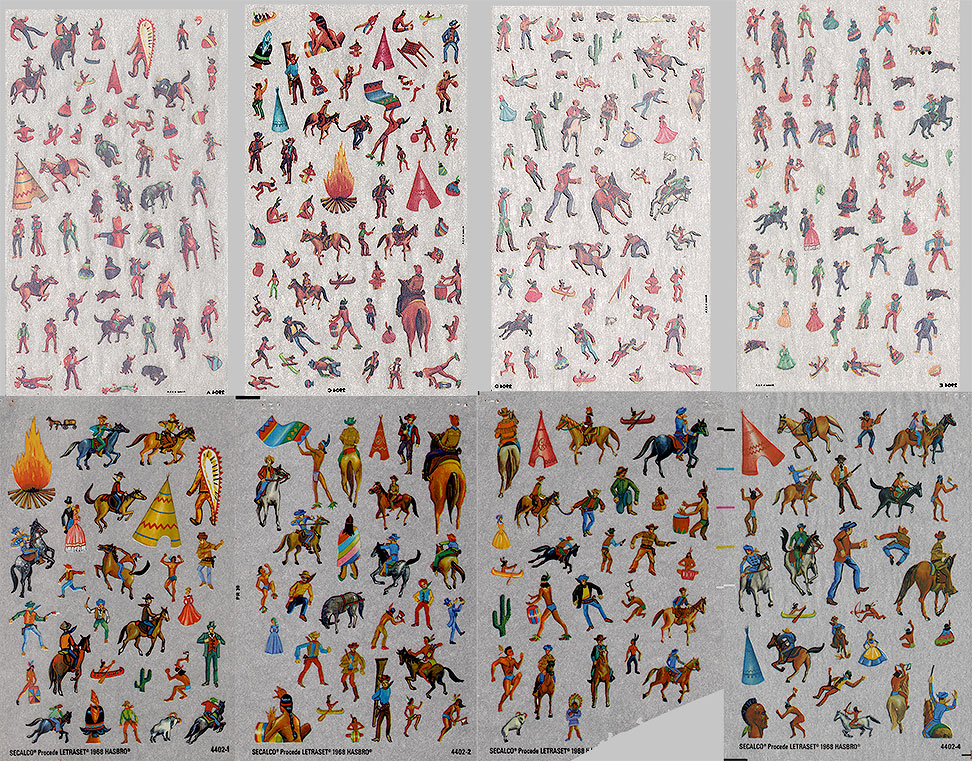 For some time we were put off investigating Mako transfers, because the Wild West sheets were SO BAD. With hindsight, we can see that the reason for this was that Letraset had to use the appalling existing Hasbro 'Cowboys and Indians' transfer artwork. And by the way: the Comano Wild West transfers were no longer mentioned in their catalogues from 1972 on, while all the others of the same vintage continued being listed. And sets which had previously attributed copyright to both Hasbro & Disney no longer mentioned Hasbro.

The next three Comano sets were probably printed the next year, 1970 — possibly quite late. It looks like they left Hasbro out of the loop, & went straight to Letraset. Astérix wasn't yet the recognisable name it would later become in the UK, so Waddington's went ahead with 'Babar' & 'Mickey et ses Amis' (retitled 'Disney Panorama'). These would have come out in 1971, with the new front cover designs but the previously-printed Mako transfer sheets. 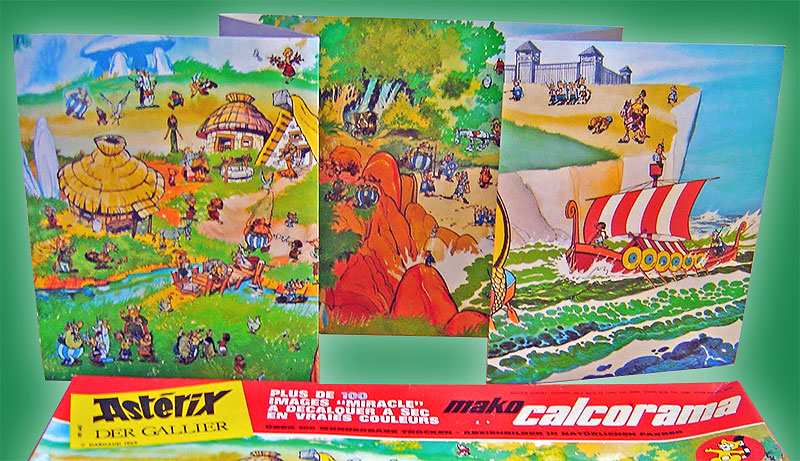 (The above two photos of the Astérix Calcorama were sourced with kind permission from monsieursoigneux.blogspot.com.)

There were two more crossover products in the next couple of years: Dumbo Circus (1971 Comano, 1972 Waddington's) & the Aristocats (1972 Comano, 1973 Waddington's) — see the following pages.

You can see how the number of transfer figures suitable for a Hasbro Picturama would be considerably greater than the requirement for a Waddington's Character Panorama, which explains why four sheets were provided with Letraset's Comano versions & only two sheets for Waddington's.

So Letraset, having printed four sheets each for the Babar, Aristocats & Mickey Calcoramas, were spoilt for choice with the corresponding Waddington's Character Panoramas, which each wanted only two. Bunging in random pairs was a practical, if callous, solution; MYSTERY SOLVED.

Hasbro's Picturamas, in their quite unnecessary but impressively bulky boxes, were clearly designed to out-compete the original Letraset Panoramas on the toyshop shelves. As is so often the way, that turned out to be heading in the wrong direction: the future lay in much smaller sets. But Patrick Tilley's very British good design & good engineering must have looked like an easy target for American showmanship, even though the poor technical quality of the Hasbro sets would ensure them a short lifespan & a dead end in the history of transfers. Even today, I come across people who really want to get hold of the Hasbro Disneyland Picturama because it looks FANTASTIC — only to hear from them, once they've acquired one, that the contents are pretty disappointing. I don't think anyone was ever disappointed with a Letraset Panorama.

• Babar Page 2: the Panorama Itself →