I was thumbing through a copy of Osprey's Essential Histories No. 9 "The Napoleonic Wars: The Empires Fight Back (1808-1812)" when I found this painting by Adolph Yvon depicting Marshal Ney's rear-guard defence during the Grand Armee's Retreat from Moscow.

Several of the figures seemed familiar. After half an hour wracking my brains trying to think where I'd seen them before, I had a 'eureka' moment that made me seek out the Super Action Transfers 'Retreat From Moscow' set and determine which poses were in direct homage to the painting. There may be others, as the part of the painting shown is just a portion of a larger scene.

The similarity is too close for a mere coincidence, showing that the SAT artist used this very picture for reference material. Interesting to get a glimpse of how much effort and research must have gone into making the historic sets look and feel authentic.

Not all that long after the above article was written, many years ago now, we discovered that the artist in question was Peter Archer, who from then until his death we were privileged to call our friend.

I had already suspected that the Super Action Heroes range existed with alternative artwork transfers, when a fellow collector spied my Kung Fu Kombat set on 7 Wonders and confirmed that he possessed a 'bloodthirsty' version of the same title. Many thanks to Ian for loaning me his used set to scan and present here as evidence.

Ian's set is full of blood and gore — the worst example being the poor victim shown top left having his eyes poked out. No wonder the censors had words! My version has all blood and gore removed along with all bladed weapons (though the dangerous-looking mace-like clubs remain).

Of course, until we obtain examples of every such set, we won't know exactly which were produced in both 'gory' and 'toned-down' versions — but browsing the Super Action Heroes gallery, there is evidence to suggest there were others — for example the blood present in the "Batman — Look Out Gotham" set.

Hopefully as time passes, more evidence will allow a definitive list. For now, you can view the entire 'Bloodthirsty' Kung Fu Kombat set (link below). 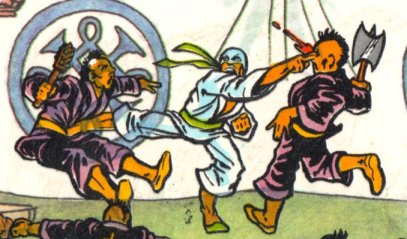 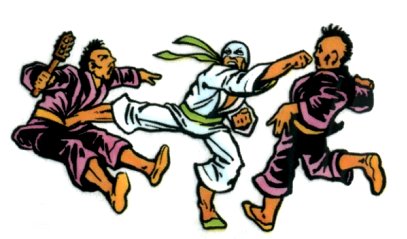