(Page One of Nine)

There is a venerable tradition of selling children packets with random contents. Over the years, Letraset were associated with several of these pernicious scams; we know of fifteen.

The big surprise is that five of these (the "Tattooze") do not involve Letraset's own patented invention, dry rub-down transfers!

These are the packets & Tattooze covered in this article:

Although the last page of this nine-page article (the Semic Press Newspaper Comics Album) is earlier, from 1971, & even though the Scandinavian connection may have led directly to this job, I've started here for secret logical reasons of my own.

And I've tried to give a chronological ordering of all these earlier packet promotions at the bottom of this page. 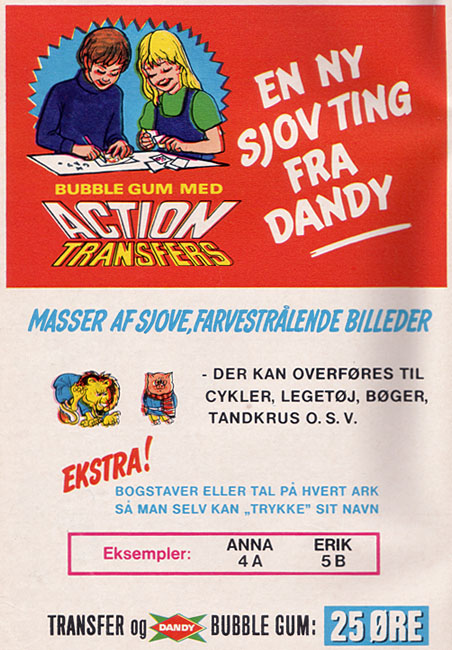 "A new fun thing from Dandy
Lots of fun, colorful images
— Can be transferred to bicycles, toys, books, tooth mugs, etc.
Extra! Letters or numbers on each sheet so you can "Rub Down" your name
For example: Anna 4A — Erik 5B"

It's a curious thing, but other than in these two photos we've never actually come across any of these transfers, which must have been quite popular!

"Interesting — check out the lion figure on the green book shown on the front of the box. Now go check the AT Series 1 Entertainments 'Circus' set."

Yes, Letraset are up to their old tricks, reusing artwork wherever possible.

The above two photos on this page (& the first on the next) have been kindly provided by Tonni Hansen, & were taken from his excellent website tohan.dk. His site, which specialises in Danish toys, is well worth a visit, particularly if you are interested in Dandy — the Danish confectionery company responsible for a great many temporary tattoos, among other things.

Although we've never seen any of the Dandy Bubble Gum Action Transfers sheets, very strangely we HAVE seen something rather similar — but without much of a plausible explanation.

You can see that half of the transfers on this sheet are Disney characters, but the other half have a 'Richard Scarry' feel to them. And the patent information with each pair of transfers is for Denmark & Sweden.

If you recognise the artist or the style of the right-hand transfers, please let me know!

There are twelve pairs of Disney transfers, & thirteen pairs of originals — five pairs of 'transport' & seven pairs of 'animals' transfers. There may well have been another sheet or two — twenty-five pairs isn't very many — but this is an entire uncut sheet.

My best guess is that this is another set of Scandinavian confectionery Free Gifts, not entirely unlike the "Dandy Bubble Gum with Action Transfers" sheet.

I came by this sheet in extremely shady circumstances (well, shady for eBay, that is) back in 2012 from someone whose address was given as an abandoned petrol station in the middle of a deserted wilderness. He apparently had many copies of this sheet, & also many copies of the sheets for 'Patterson Blick Instant Picture Book No.1' & for the Combat Bubble Gum Instant Picture Sheets.

"Monsters to Caveman" (PBIPB No.1, K108) was printed in 1968 (marked 1967), & the Combat Bubble Gum promotion was also believed to date from 1968. So it's reasonable to assume that these three very similar early gravure sheets were lying around in a storeroom or somewhere shortly after having been printed in 1968; this places the "Disney/Scarry-a-like" sheet shown here squarely in 1968 — as you would guess from the style of the colour separations — which of course predates the 1972 "Dandy Bubble Gum with Action Transfers" promotion, from above.

For strict chronological accuracy, then, we would probably have to place these early packet promotions in this order: