This page is highly indebted to Nigel Mercer, who is the World's leading authority not only on A&BC Chewing Gum, but also on English football cards. And he is a member of SPLAT. For more information on these subjects, his website is strongly recommended:

Following their success with the 1969 Topps Baseball Cards Magic Rub-Offs, Letraset followed up that set of forty-eight transfers with a larger set — although each individual transfer was the same size as before. 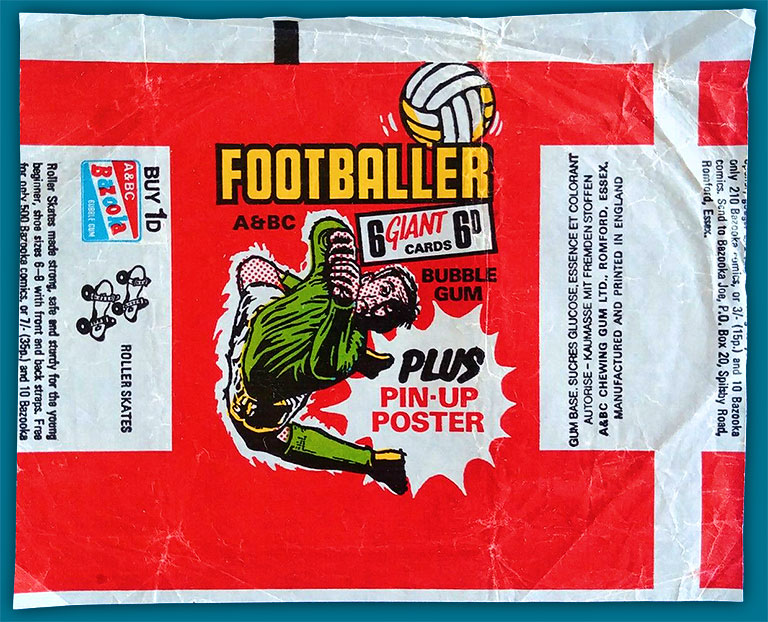 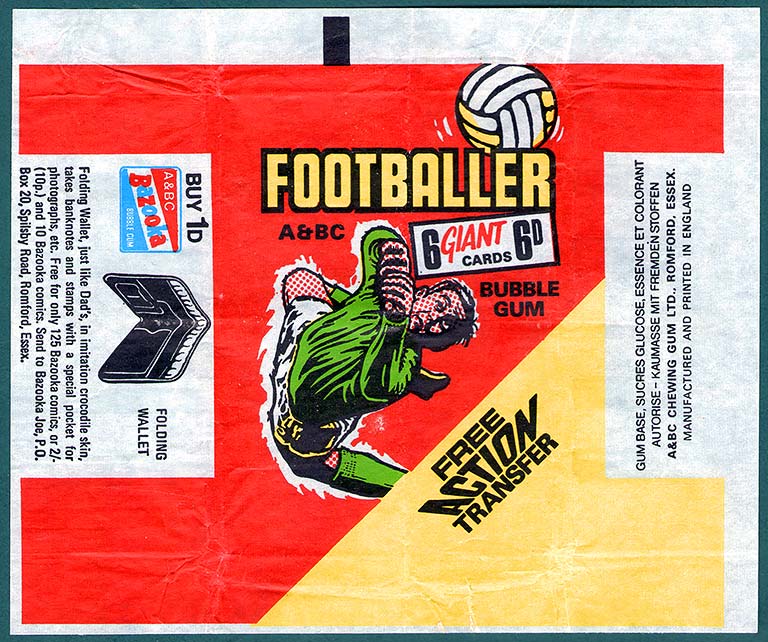 Series 3 — scan courtesy of me.

This is the only ad we've seen so far for A&BC Footballer; this example appeared in Smash! on the 13th March 1971. 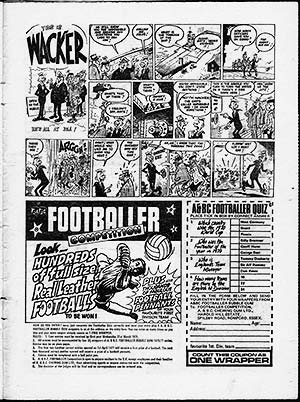 Here's the single transfer which we have in the Archives. You can see that the transfers are supposed to be cut from their sheet along the black vertical bar; I wonder if its being wrongly cut from the sheet makes it more valuable? 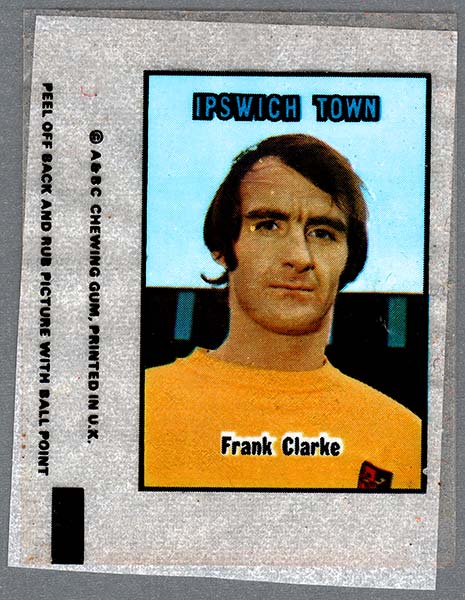 "These transfers all seem to use the images from the Orange back cards (see http://cards.littleoak.com.au/index_abc.html for the relationship). However, a number of the images have been slightly altered, using the methods of the times, e.g. cropping or expanding, and most obviously flipping." 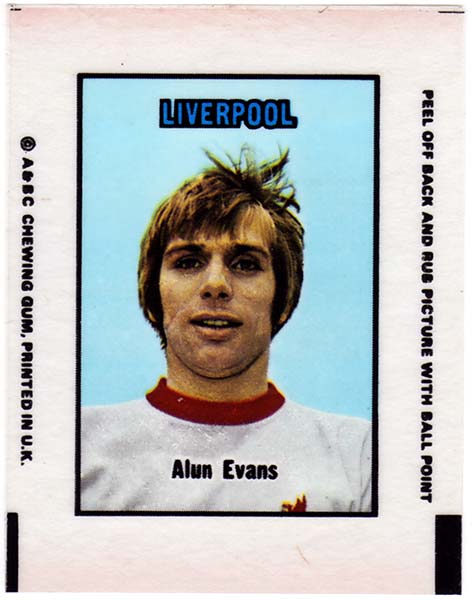 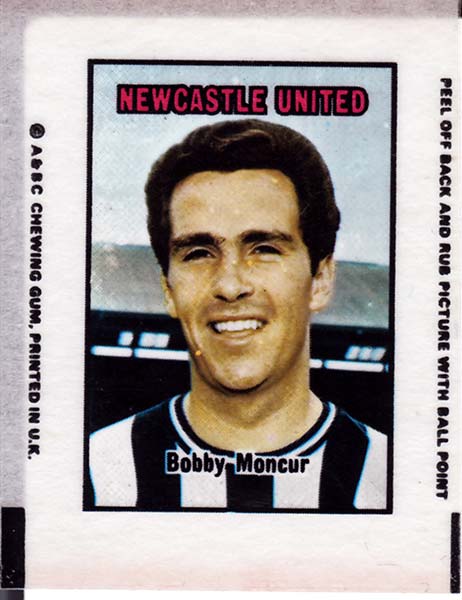 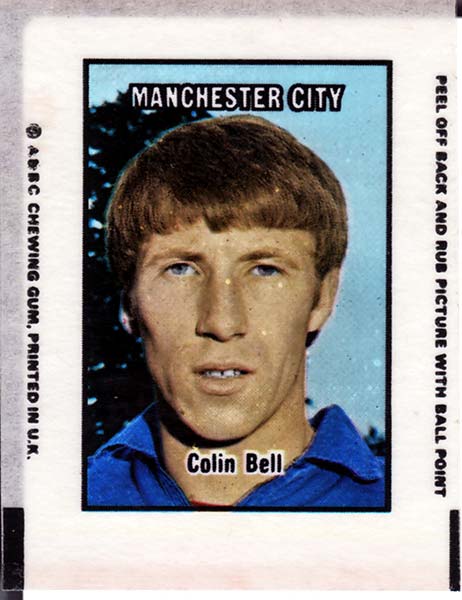 For some reason, a tradition has sprung up amongst football card collectors of calling these transfers "transparencies", even though they are clearly marked "Action Transfers" on the wrappers. Let's hope this doesn't lead to slide collectors being disappointed when they discover that you can't project them!

So here are all 72 of the transfers in this range. I am grateful to Nigel Mercer yet again for providing the info regarding teams, & for allowing me to re-use the images from the almost-identical table on his website. In the event, I've used sixteen of his, & the others were provided by generous contributors who were happy to share their images. We're still looking for high-resolution scans of many of the transfers from this range, so if you're interested in helping, please contact us via the Facebook Action Transfers Page.

Possibly A&BC specified the exact size of transfer, although since the previous job for Topps used the same size, it was more likely Letraset's recommendation.

You can't get 72 cards on one Crown sheet, but there is room for up to 66; two sheets of 36 would mean a lot of spare space on each sheet, which Letraset might have preferred not to waste. So instead of printing one copy of each transfer, it could be that some transfers appeared more than once, in accordance with the time-honoured tradition of leaving some items scarcer than others.

However, a lucky break gave us an insight into the ordering of the transfer sheets: eBay Seller martin-bear listed some A&BC sheets which had been catastrophically mis-cut, allowing us to piece together their order on the full (uncut) sheet:

You can see that there are twelve different transfers in this strip, which makes 21". That's longer than a sheet of Crown! If there were six of these strips of twelve, that would make a total of seventy-two transfers (the target number) on a sheet 13½" wide — perfect to fit the 14" printable width.

This would mean the artwork would need to be prepared on a 21" or 22" sheet, which is longer than Crown, but of course perfectly printable. It all fits together…

Regarding the exact dating, Nigel says:

"To the best of my understanding A&BC Chewing Gum produced Series 1 cards in June/July for release to coincide with a new football season commencing in August*. They produced Series 3 to 'refresh' the market before the end of the season, so perhaps February/March 1971. By splitting the difference you can infer that Series 2 would have been released around November/December 1970. Of course, this is when the packets were sold, not produced. And who knows when the transfers were produced.

"You can deduce some information from the players and clubs depicted on the transfers, but this is an inexact science. For example, Henry Newton is shown as a Nottingham Forest player. He was transferred from Forest to Everton in October 1970, so this gives some indication of when at least some of the transfers were designed i.e. pre-October 1970. Pop Robson was transferred from Newcastle United to West Ham United in February 1971, but is shown in the transfers as a Newcastle United player. It doesn't answer the question about whether they were designed and produced as two sets of 36 or one of 72. Nor do I know which 36 of the 72 were included with Series 2 and which with Series 3.

"My research on the cards themselves (not the transfers) suggests that A&BC Chewing Gum did not produce/print all three Series for one set at the same time. By the time they came to produce Series 3 they were known to make changes to the set design to accommodate transfers** which occurred during the season. For example, they were going to produce a Series 3 card for Chris Barnard (Ipswich Town) but he was transferred to Torquay United in October 1970 and therefore, in the eyes of A&BC at least, became less marketable and was dropped from the set. However, once again, this does not mean that the same logic applied to the transfers."

*: I am told that the football season in England "begins on the first week of August, and ends on the second week of May".
**: Nigel is referring here to the transfer of players from one football club to another; not to the Letraset transfers.

Nigel's information regarding updating the repertoire of cards & players for each series makes perfect sense for the cards in the packets (which would have been printed Offset Litho), but as he points out, it might not apply to the Letraset transfers since Rotary Gravure was hugely more expensive to set up. Changes to artwork, being costly, were normally avoided where possible.

Pages in this article about Free Gift Transfers with Confectionery: