Free Gift Transfers with Other Products

"Collect all 14 super transfers to complete your calendar", says the envelope (not shown, but green — apparently).

Above are the four I've so far managed to obtain for scanning; below, four more whose auction we missed.

Bevy1703 kindly gave us permission to use their auction photos.

This series does beg some interesting questions: the events depicted seem very British (Fireworks in November & a beach scene in August, for example), yet the text on the sheets is very awkward for ordinary English:

"Transfers for a April on Texaco Calendar" 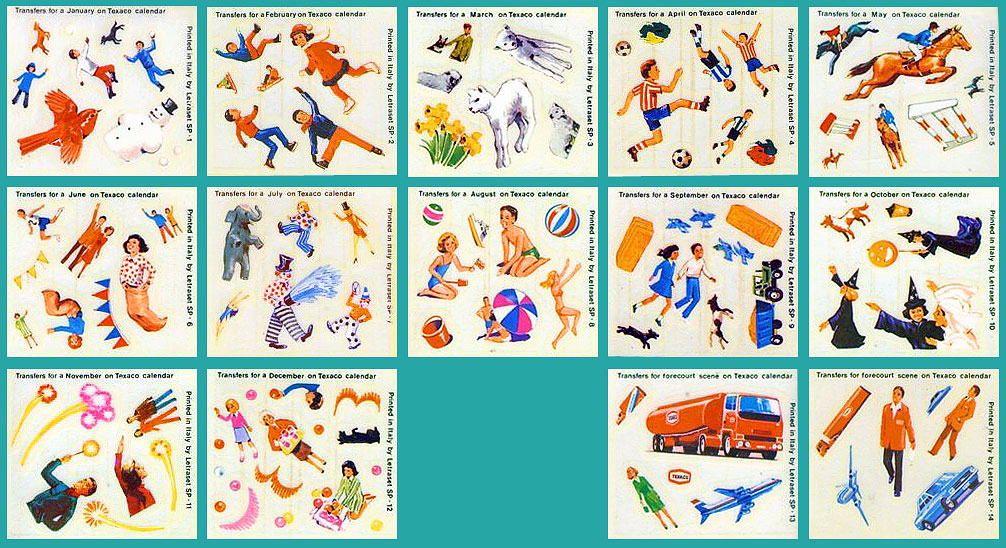 And why the serial numbers SP-1 to SP-14? Letraset used "SP" for Special Sheets, but these are not Specials — & the numbers would have been very much higher if so. In fact, it's because they aren't serial numbers at all; the text refers to Letraset's company name at the time: "Letraset SP".

The date, which we have as 1981, is not specified anywhere. Presumably this figure is mentioned on the envelope which we haven't actually seen, & so is currently just hearsay. If it's correct, though, then this set would presumably have been produced towards the end of 1980.

And no calendar & no envelope to show you as yet.